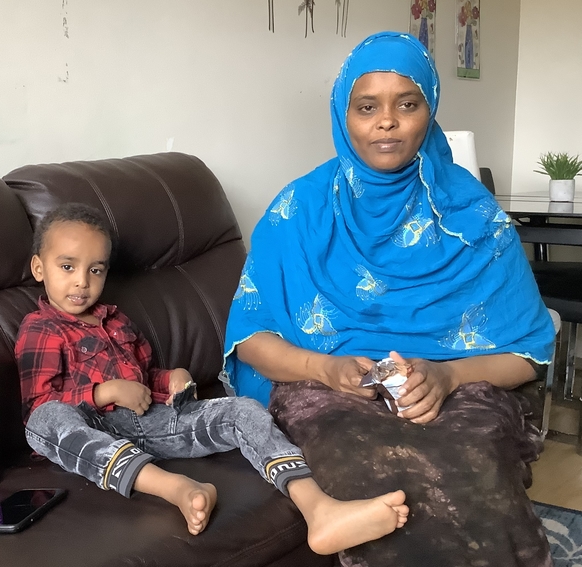 On a sunny warm summer evening in 2019 a very tired looking Khatro Hussein arrived at the Halifax airport with her two young sons Abdimajid Aden (aged 7) and Abdirahman Aden (aged 4). She had travelled a long way from Nairobi Kenya in a leap of faith that her life and that of her family would be better here. She was leaving behind her mother and an infant son and other family members in Haggedera Refugee Camp, which had been her home since 1992, and her husband who was living and working in Uganda. Waiting to greet her were Jim Stanley and Sandra Murphy of the FBCH Refugee Working Group (RWG) and a representative of the Berkeley Homes which had supplied a van for pick up.

Khatro had been a child of two when the civil war in Somalia forced her parent to flee to neighbouring Kenya. She has no memory of her native country. She was raised at Haggedera , attended school and later worked for a while for an NGO providing service in the camp. Her boys were all born in the camp. She was in Nairobi seeking medical treatment for her middle son, leaving her infant son in the care of his grandmother, when the offer came through UNHCR to come to Canada.

On her arrival the Refugee Working Group swung into action to get her and the boys settled and to ensure all the myriad practical requirements for arriving refugees were taken care of. After these early requirements were dealt with a priority was to file the application for what is called a One Year Window to bring her infant son Abdihafid to Halifax. The boys settled into school, Khatro into educational opportunities and a short term job and by December things were moving along in the effort to bring Abdihafid to Halifax. Then of course Covid 19 put the whole world on hold and the long wait for Abdihafid  began.

The period of Covid with lock downs and school closures and home schooling was hard on Khatro as well as the worry about her family in Africa. Khatro did find a convenient part time cleaning job when the boys were in school and continued taking several on-line ISANS courses. Through the course of 2019 the Refugee Working Group in partnership with ISANS was able to submit an application to sponsor Hassan, Khatro’s husband, to join her here.

Hassan at the time of Khatro’s coming to Canada was living and working for an NGO in Uganda, where he is registered as a refugee from Somalia. His work ended with the arrival of Covid but later as lock downs loosened he has been working at a gas bar. He is in touch almost daily by What’s App with Khatro and the boys trying to maintain a presence in their lives.  Normal times, if the application process went smoothly, would see him arriving in Canada about now. There is, however, an application backlog which is not expected to be dealt with until at least late in 2023. Waiting is extremely frustrating especially as information on what is happening is next to impossible to obtain.

You are all well aware by now that after a very long delay little Abdihafid (now 3) arrived in Halifax on December 8th, 2021. What a joyful moment and how well he and his brothers have adapted to each other and he to life here. Luckily, again through the use of What’s App, he can continue to stay connected to his grandmother Abshiro in Kenya. She, however, is in precarious position as the Kenyan government is moving towards the closure of refugee camp in that country. The Refugee and Newcomers Committee, with the support of the congregation, plans to submit an application this year to sponsor her to join Khatro and the boys. At the moment, however,  applications are not being accepted by IRCC for this year.

Khatro and the boys have adapted well to life in Canada but as with many things the pandemic has not made life easy for them. Khatro is struggling as a single parent and covid has not allowed her to connect with others in the community who might provide her with social and practical support. The boys schooling has been disrupted as has their ability to be involved with the local mosque and Quran School. Members of the Refugee Working Group have also been limited in the social support they can provide. The family is just getting through a covid infection, which luckily proved mild. They are resilient, however, and Khatro is determined to pursue training, become a Canadian citizen and to get a good job. She hopes for the quick arrival of Hassan and her mother and in the future to helping other family members to come to Canada.  We at FBCH are fortunate to be in a position to provide support for her efforts and those of us who have gotten to know Khatro are privileged to do so. We hope that many more of the congregation will meet her and the boys when everything is more back to normal.

Please continue to support the work of the Refugee and Newcomers Committee, through your prayers and through donations to the Social Justice Fund, as it works to reunite Khatro’s family and to help other refugees.  Keep in mind the words of Jesus, “ I was a stranger and you took me in”.