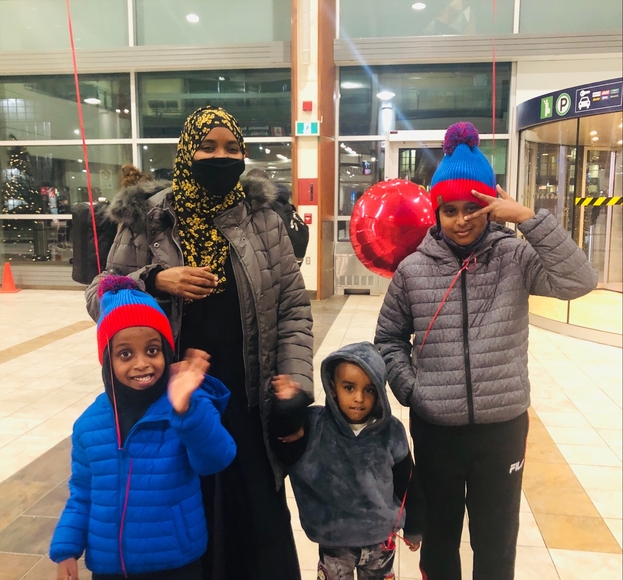 First Baptist Church Halifax has a long history of supporting refugees.  Our current journey in this effort began when an ad hoc group of church members and community friends joined together in what we thought was a short term effort to sponsor a Syrian family, the Sweedans. For various reasons that family never did arrive but, while waiting, the Refugee Working Group (as it is known) branched out to see what else could be done to support refugees.  In-kind donations were shared with Government Sponsored Refugees; a partnership was formed with the Rainbow Refugee Association of Nova Scotia and settlement support was provided to one of their sponsored refugees; funding was provided to a family from the Democratic Republic of the Congo in partnership with the Universalist Unitarian Church when they arrived in Halifax with no financial support for their first year. Khatro Hussein and her two sons, Somali refugees in Kenya, were sponsored and efforts were begun to bring the youngest son (an infant at the time) to Nova Scotia.  An application to bring her husband Hassan to Canada was submitted in December 2020.  The Sweedan’s application was dropped when it seemed that they would never be coming.  When that appeared to change we helped ISANS pull together another group to support them if and when they arrive. This original ad hoc committee is still together but its commitment will end when Hassan arrives and is settled.

In the meantime a standing committee, the Refugee and Newcomers Committee, was formed in 2020 to continue the ongoing commitment of FBCH to refugees and to newcomers to our congregation. Covid has made it difficult for the group to function as it might like but already this committee is making a difference. The church formed a partnership with a group in the community called Raise to submit an application for the Quieros family (mother, daughter, grandmother) from Venezuela but who are currently refugees in Peru. We provided financial support for needed documentation for Franc Nannyanga from Uganda to bring her three children to Canada. They arrived last spring. We agreed, with congregational endorsement, to begin the sponsorship process for Khatro’s mother Abshiro . The RNC is also committed to providing assistance to refugees, with whom we have connections, for their substantial travel loans.

Over Lent you will be able to learn more about our proposed efforts with Newcomers and also about the individual refugees with whom we are connected. Watch for the blogs and photos which will be available on FBCH website.

In order to continue and expand our efforts  in supporting refugees, funds are needed. You have  been generous with your gifts in the past and we ask you to consider making a donation to the Social Justice Fund, 80 % of which will come to the Refugees and Newcomers Committee. You can also make weekly donations through your envelope, on-line at our website  or through the  pre-authorized option.

In closing I want to highlight one of the moments of joy of our efforts. Three year old Abdihafid Hassan arrived in Halifax on a snowy night in December to be with his mother and two older brothers. He is settling in and loves his older brothers who dote on him. He is learning English at an amazing pace. In fact on his recent fourth birthday his word of the day was “amazing” and he already knew the words and tune to “Happy Birthday To You”.

Please continue to support the work of the Refugee and Newcomers Committee with your prayers and with your financial support.