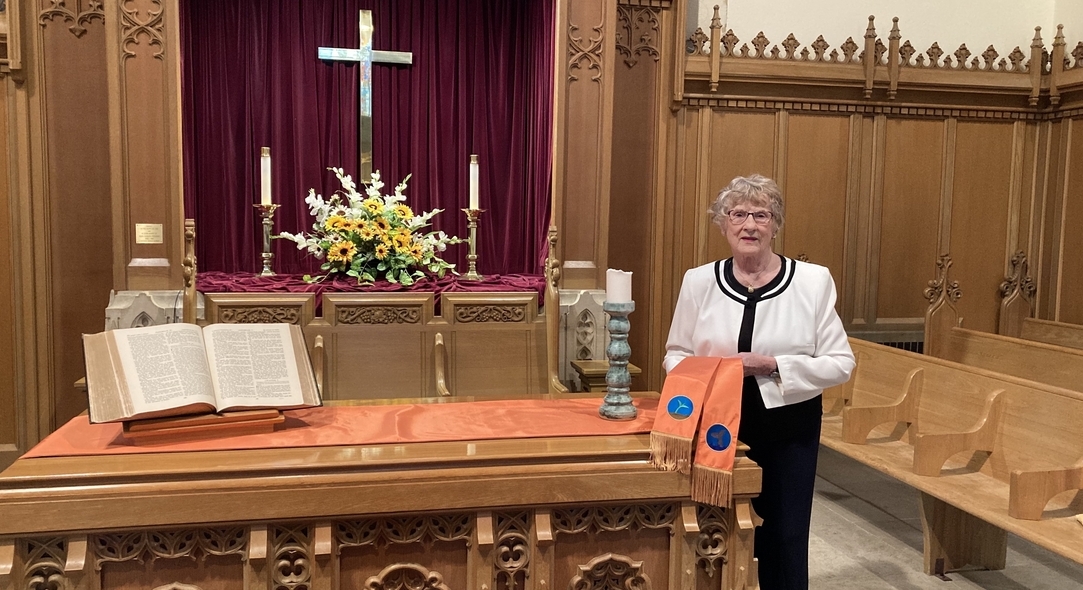 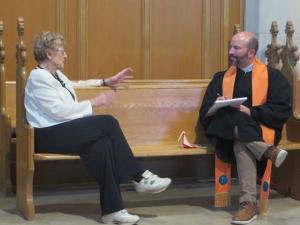 This year, First Baptist Church Halifax is celebrating the Season of Creation for the first time. This is a new season of the church year that began within the Uniting Church of Australia and is being adopted by churches and denominations around the world. During the Season of Creation, followers of Jesus are called to give thanks for the beautiful and life-sustaining gifts of God in creation and reflect upon our calling to nurture these gifts.

Like other seasons of the church year, the Season of Creation has a designated colour—orange. Orange is the colour of fruitfulness, harvest, and joy. When the Diaconate affirmed our adoption of this Season, efforts turned to designing paraments (the communion table cloth, pulpit cloth, Bible bookmark, and clergy stoles that mark the seasons of the church year with colours and symbols). On Sunday, September 6, Rusty preached a sermon explaining the symbols in our new paraments, symbols based on Jesus’ first words about his death and resurrection in Matthew’s Gospel (Matthew 12:40). If you missed that sermon, you can watch it on the FBCH YouTube channel).

When Johanne McKee heard FBCH needed a new set of paraments, she immediately volunteered to donate them as a gift to the church celebrating her fifty years of service on the the Flower Committee.

Johanne and Ian McKee began attending FBCH in 1968, just before Ian and the family were transferred to Toronto. Fortunately for FBCH, the McKees returned to Halifax and to the the church in September of 1970.

That same month, Joan Fraser asked Johanne if she would serve on the congregation’s Flower Committee. Johanne immediately became an active member of the committee. In those days, committee members were assigned months when they were responsible for flower arrangements. Most of the flowers were procured from funeral parlours. Flower arrangements that were left by families after funerals were deconstructed and placed into appropriate arrangements for the church. Often, following the Sunday service, flowers were separated and taken to church members who were homebound.

Johanne did this work for many years and began taking on a leadership role. It was under her guidance that the Flower Committee began inviting memorial donations at Christmas and Easter. Indeed, the first year of receiving memorial donations for Christmas poinsettias resulted in the Flower Committee being removed from the budget—they brought in more funds to support their work than previously allotted in the church budget.

Over time, Johanne has encouraged the Committee to support projects related to preparing the Sanctuary for worship and even supporting landscaping—bringing the beauty of flowers and plants to the exterior. Last year, the Flower Committee purchased our new 12’ artificial Christmas tree after we learned that fire regulations would no longer allow us to place real trees in the Sanctuary.

Johanne was also among the first to join the newly formed Green Team. She initially attended a Green Team meeting out of curiosity about how the church might be involved in caring for the natural world. In the first meetings she attended, she was amazed to learn how many faith organizations are supporting ecological efforts, organizations like the Green Churches Network. In one of her efforts to support the work of the Green Team, she made several compost bin liners out of newspaper and passed them out to people with instructions on how to make their own.

Thank you, Johanne, for your decades of service to the congregation and for the beautiful gift of our Season of Creation paraments. 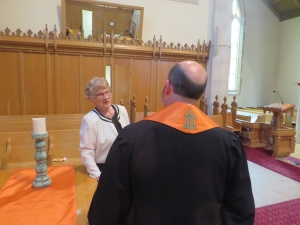