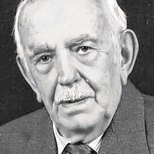 In Memory Of Charles Joudrey

At Charlie’s 90th birthday party, he said goodbye to the well-wishers with “See you all in ten years!” To mark his 95th birthday his request was clear … so Jeff and Phil took him on an epic road trip to Toronto to see his beloved Blue Jays. He was welcomed to the field with a ride in a golf cart to our third-row seats, waving as the crowd cheered! One month ago Charlie was the guest of honour at the party to which he had invited everyone, ten years earlier. He died this past Saturday having celebrated his 100th birthday. Charlie was predeceased by Della, his wife of 59 years. He is survived by sons, Jeff (Susan), Truro; and Philip (Martin), Truro; his grandchildren, Kristin (Kyle), Toronto; Jon (Meaghan), Riverview, N.B.; Mark, Truro; and great-grandson, Cohen, Toronto. Charlie was born on the family farm in Pine Grove, Lunenburg Co. He enlisted in the military at a young age and following a period in the Canadian Army, General Service, served in the Militia for a further 17 years. He worked in Halifax at Gordon B. Isnor’s Men’s Clothing for 33 years and then at Wanderlust RV Sales. After he and Della moved to Bridgewater, he worked at Nauss Brothers’ Hardware, and retired as a Commissionaire at National Sea Products. Church life was always important to Charlie. He and Della were founding members of Mulgrave Park United Baptist Church, attended Bayers Road United Baptist Church, and then Bridgewater United Baptist. When he returned to Halifax, he became part of the welcoming community and worship at First Baptist Church. Charlie loved the outdoors and family camping in particular. He was deeply committed to promoting camping and the community that it created, through the National Campers and Hikers Association. With Della, he served as Provincial Director of that organization for many years. During Charlie’s later years he enjoyed the kind support of the staff and residents at Drumlin Hills, Bridgewater. Sue, Shelly and Tracy and many more of the staff became part of his extended family. He lived the last years of his life supported by the extraordinary care of the team on 5 East at Camp Hill Veterans’ Memorial Building, Halifax. To the last day of his life, they amazed us with their complete commitment to Charlie’s quality of life. A celebration of Charlie’s life will be held in First Baptist Church, Halifax, on Saturday, April 30th at 11 a.m. His family will welcome friends at the church during the hour before the celebration. Friends attending are request to wear masks. Charlie had a lifelong love for all four-legged creatures. They completed his life. In lieu of flowers donations may be made to Hope for Wildlife.