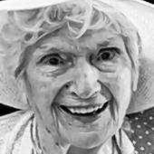 In Memory Of Doris Anne Grant

One hundred years of love, laughter, and resilience came to an end with the death of Doris Anne Grant on November 29, 2018 in Alderwood, Baddeck. Born in Cleethorpes, Lincolnshire, England in 1918, Doris Best was in the Women’s Royal Navy Service during the Second World War and was seconded to the Royal Canadian Navy pay office where she met the love of her life, Earle Thompson Grant, RCN, formerly of Glace Bay. Married in England in 1944, the couple moved to Canada after the war. As a war bride, Doris bravely left all she knew and settled into her new life in Canada while retaining many of the traditions of British life. These included freshly baked bread every Friday, roast dinners with all the trimmings every Sunday, as well as sausage rolls, pork pies, trifle, and pudding (“I’ll have another pint of the gravy!”) at Christmas. She threw herself into a life in Canada that included camping trips to Prince Edward Island; only an English expat would take a linen chest and a silverware set and insist on a special tent for a toilet. Predeceased by her husband, Earle, she leaves behind children, Rod (Judi), Baddeck; Wendy (Rick Swain), Harmony, Queens Co.; and Holley (Bill Bailey), Sydney; her brother, Doug, England, and sisters-in-law, Harriet, Halifax; Patsy, Helen, and Doris; Glace Bay. She was a wonderful grandmother who was there for all the important events in the lives of her grandchildren, Jason, Tim, Matthew, Sarah, and great-grandchildren, Luke, Nate, Maeve, and Arden. The family is grateful for the incredible care and friendship our mother received from the staff at Alderwood. We couldn’t have asked for more. Cremation has taken place under the care and direction of MacAskill Funeral Home, Baddeck. A memorial will be held at a later date. Donations may be made to Alderwood Baddeck or to a charity of your choice.