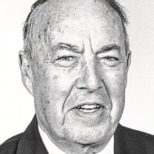 “Jack”, son of the late Lt. Col. J. Gordon and Eileen C. Quigley, was born in Halifax, on April 21, 1925 and passed away peacefully at home on June 25, 2022. He received his early education in Halifax. He entered Dalhousie University in 1941 but interrupted his university training in early 1944 to serve with the Royal Naval Volunteer Reserve Fleet Air Arm until the fall of 1945. During this time, he did basic training at Portsmouth, England. He then returned to Canada to be trained as a pilot within the Empire Training Plan at St. Eugene, Que., and Kingston, Ont. He just completed this training when the Second World War ended. In the academic year 1945-46 he completed his requirements and obtained his B.Sc. entering Dalhousie Medical School to graduate with the M.D.C.M. in the class of 1951. At this juncture he married Gloria Lorraine Mansour. The years 1951-1956 were spent at the University of Toronto training as a specialist in Ophthalmology. After a short time practicing his specialty in Los Angeles, Calif.,, he and Gloria returned to Halifax to live and started a private practice which grew to include seven paramedical personnel. He served as a member of the Faculty of Medicine of Dalhousie University from 1959-1993 with terms as Instructor, Lecturer, Assistant Professor and Full Professor in the Department of Ophthalmology. He spent much time participating in medical professional affairs at the local, provincial, national and international levels. He was a long-standing member of the Royal Nova Scotia Yacht Squadron, Ashburn Golf Club and Confrerie des Chevaliers du Tastevin. Jack retired from his medical practice in July 2010. Retirement saw him having time to golf at Ashburn Golf Club (especially with the “Gaspers” group), exercise and badminton at Dalhousie, and walking. Retirement also allowed him more time to visit his children and grandchildren. Besides his parents, he was predeceased by his brother, William Gordon Quigley (1985); and his loving wife, Gloria Lorraine Quigley (2013). He is survived by his children, Dr. Michael G. Quigley (Dr. Janet Wilson), Montreal; Dr. Robert L. Quigley (Debra JD), Villanova, Penn.; and Paula Quigley, Coral Gables, Fla.; and his loving grandchildren, Elizabeth, Carolyn, Julia, Andrew, Lola, Sara and Will; as well as his great-grandchildren, Ruth, Jack, and Theodore. A private virtual memorial will be held at a later date.