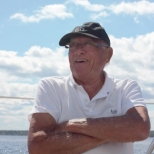 In Memory Of Elbert Stevenson

After completing his commerce degree at Dalhousie University, Stevie’s professional life began in sales with Burn’s Meats in Ottawa. He then owned a Canada Dry franchise in Sydney until moving to Halifax where he enjoyed a long and distinguished career as an agent with Sun Life of Canada. Recognition of his outstanding qualities and accomplishments occurred in 1999 when he was inducted into Sun Life’s worldwide Hall of Fame.

Stevie’s ultimate enjoyment was being with Marjorie and the whole family. He was always there to cheer and support each of his children and grandchildren in their various academic, sporting, musical, and career pursuits.

Stevie always enjoyed getting to know people. If he didn’t know you, he always started the conversation with “What part of Cape Breton are you from?”. If you were not from there, he would always help you find your connection to the Island he referred to as “God’s Country”. Always first to help anyone in need, you could find him in the early morning hours at Halifax’s Brunswick Street Mission flipping pancakes. During the Christmas period, he would help the Salvation Army by signing up for several shifts at the mall. Each shift would start by stuffing a few twenties of his own into the “pot”. He also delivered food to those in need.

He and Marjorie travelled the world during their beautiful marriage. His adventurous spirit was matched by hers, as they broadened their horizons and explored six continents during their six and a half decades together.

Stevie downhill skied until hanging up the boards at the age of 88. He also loved being on the sea – a passion that spanned a lifetime. From racing on the Mira river in homemade boats, sailing in the Bras d’Or Lakes and around the islands of Mahone Bay, to teaching his grandchildren how to sail “Staccato” and “Spectrum”, he loved where the wind would take him.

He was a member of First Baptist Church Halifax, the Halifax Probus Club, St Andrew’s Masonic Lodge, and the Nova Scotia Senior Ski Club. He was a proud graduate of Sydney Academy (1948) and Dalhousie University (1952).

Arrangements have been entrusted to Snow’s Funeral Home, with a family service planned for a later date. Online condolences may be sent to the family by visiting: www.jasnowfuneralhome.com In lieu of flowers, memorial donations may be made in his name to First Baptist Church Halifax, the Dalhousie Medical Research Foundation, or charity of your choice.