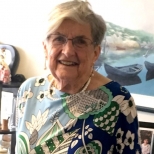 In Memory Of Jean Dexter

Following graduation from Moncton High School, she went on to graduate from the Maritime College of Pharmacy at Dalhousie University in 1945, working with her father at Collins Drugs until her marriage in 1949 to Carl Dexter.

In the early 70s Mom went back to pharmacy part time working first with her cousin Doug Colquhoun and then with Lawton’s Drugs. Over the years she volunteered with many organizations including Girl Guides, Brunswick Cornwallis Preschool Board, and the Women’s Inter-church Council of Halifax. While at Dalhousie she joined Alpha Gamma Delta Fraternity and maintained an active membership as an alum for 75 years. Mom was honoured by being made the first recipient of the Bonnie Regan Kirby Outstanding Alumnae Award for service to her fraternity.

Mom was an active member of First Baptist Church, serving on many boards and committees including the Auxiliary, and Women’s Missionary Society. Handcrafts, cross country skiing, bridge, and sailing with the family were particular interests.

Service arrangements to be announced at a later date. Donations in her memory may be made to First Baptist Church or the Heart and Stroke Foundation.