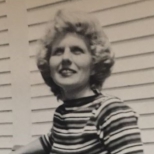 In Memory Of Jeunne Schoales

June “Jeunne” Lucilla Schoales passed away peacefully on February 5, at 95 years young. She was the beloved wife of Herbert Schoales with whom she shared sixty years of marriage and raised four children, two boys and two girls. Jeunne was born in Westminster, Massachusetts on June 4, 1923, the youngest of the eleven children of Ernest Smith and his wife Kate.

Shortly after graduating from high school she met the love of her life, Herbert, who was a jazz trombonist. Together they travelled throughout the east coast of the United States living in Augusta, Georgia, New Orleans, Louisiana and eventually New York City. While Herbert was studying music at Juilliard School of Music and Columbia University, Jeunne was caring for their first son, Gary; supporting the family with a clerical job; and taking art classes at Columbia University. Her renowned mentor at Columbia University, Dong Kingman, thought so highly of her artistic talents that he strongly encouraged her to fully dedicate her life to painting. It was at this time that she became an exceptional watercolour painter, however, she and Herb also wanted more children so the family grew.

In 1976 Herbert got a job teaching brass instruments in Nova Scotia and the family moved to Halifax. Throughout the ensuing forty years Jeunne continued her artistic development holding many shows in and around Halifax. Throughout her long life she continually produced paintings that ranged from traditional watercolour landscapes to more abstract works. She held many art shows in Halifax and her paintings now grace homes in Canada and the United States. In addition to her art Jeunne filled her life with a wide range of avocations including antiquing, listening to opera, reading fiction, history and philosophy. Jeunne was also a very spiritual person and a member of the First Baptist Church in Halifax. She found a wonderful community of friends there who were a great support to her over the years. Friends and relatives will always remember Jeunne for her quaint New England accent, vibrant smile, bright clothes and her love of a good laugh.

Jeunne is predeceased by her husband Herbert, her daughter Audrey, and her granddaughter Allison. She survived by her sons Gary and Glenn, her daughter Melissa, her daughter-in-law Virginia Schoales, her son-in-law Charles Bishop, her grandchildren Emilie Johnston and her husband Adam, James Bishop and his wife Heather Meldrum, Johnny Bump, Richard Bump, her greatgrandchildren Amelia, Samantha, Anna, and her life-long friends Tim and Kelly Backman, and their son David.

Jeunne lived the final year of her life at Parkstone, and many thanks to the staff there who kept her happy, active and comfortable.

There will be a memorial service for Jeunne in early summer; date to be announced . Jeunne loved helping children, so in lieu of flowers, a small donation to Hope Blooms(https://hopeblooms.ca) would be appreciated.