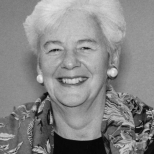 In Memory Of Joan Fraser

Joan Fraser, 87, passed quietly after a brief illness and short stay in hospital. She will be missed dearly by her children, Peter (Debbie Fitzgerald), Susan (Nick Mosky), Janice (Steve Machat) and by her grandchildren Lindsay, Sasha, Hannah, Dylan, Ella, Sam and Noah, as well as friends, classmates, neighbours, fellow volunteers, colleagues and parishioners. Joan loved people and politics and was deeply committed to serving her community.

Joan grew up in Woodstock, NB where she thrived under the watchful eye of her loving mother, Jennie. She lost her father, Ernest, at the end of the war in 1945 and her brother, who she adored, in a tragic sledding accident in 1940. After high school, Joan left Woodstock for Wolfville, NS to study at Acadia University. Joan was delighted when her daughter Janice and granddaughter Hannah chose to follow her footsteps furthering their education at her alma mater.

Joan graduated from Acadia with a BA (Economics) and moved to Halifax where she worked at Imperial Oil and later, Trans Canada Airlines. It was during her time at Imperial Oil that she met her husband and life partner, David. They married in 1959 and enjoyed over 50 years together before David’s passing in 2014. Their marriage was one of love, family, generosity and good times with friends.

Joan will be remembered for her eagerness to get involved and make her community a better place. She thrived on the human connections she made along the way and was known as a tireless campaigner, advocate, mentor and community organizer her entire life.

In 1982, after years of volunteer work and raising a family, Joan was appointed as Judge in the Court of Canadian Citizenship, a position she held until 1985. Following this, Joan was the Executive Director of the Heart and Stroke Foundation of Nova Scotia until her retirement in 2002. In this role, Joan helped lead ground-breaking work to prevent disease and increase medical research capacity in Nova Scotia. She became a champion of the health charity sector in building a healthier community.

Joan recognized the positive impact politics could have on people’s lives. She knew that to get things done you needed to organize. Joan had an open mind and held many diverse views, nevertheless, throughout her life, Joan was a fierce and staunch supporter of both provincial and federal Liberal parties. She organized parties and helped to lead campaigns but was just as happy to make phone calls, rally support and knock-on doors. In her actions, Joan showed the importance of building relationships and stepping-up to do the tasks that needed to be done.

Joan served on several volunteer boards and advisory committees throughout her active life. She was a founding member of the Joseph Howe Festival Society and served as a Board Member on the Halifax Transition House. She was a former Nova Scotia representative on the Federal Advisory Committee on the Status of Women and a past member of the Board of Directors of the Queen Elizabeth II Health Sciences Centre. Joan also served on boards for Acadia University and the Acadia Divinity College. She was a member of the Beta Sigma Phi sorority for over 50 years and always looked forward to weekly meetings, fundraising and social events. In 2013, Joan received the Queen Elizabeth II Diamond Jubilee medal, which honoured the significant contributions and achievements made by Canadians.

Joan’s hope and passion for a brighter future, her eternal optimism and kindness towards others were deeply rooted in her spirituality and faith. She was a long-time member of First Baptist Church, Halifax serving in many capacities over the years including the First Baptist Church Auxiliary, Chair of the Diaconate and Chair of the Board of Management.

As busy as she was in the community, Joan always found time to relax and travel with friends and family. Joan cherished holiday and social gatherings, always decorated beautifully, and ensured there were special treats for everyone. David’s birthday celebrations were always a summer highlight. No one liked a beach on a sunny day more than Joan whether it was in Hubbards or Port Hood, Port Howe or Kennebunkport, Florida or Vancouver Island.

Joan continued to live independently with the support of dedicated VON and Northwood Homecare staff. The family would like to thank Dr. Andrew Humphrey, the VG 3rd and 6th floor ICU staff and Urology Unit physicians for their compassionate, patient and gentle care of Joan in her final days as well as the countless friends, family and neighbours who ensured Joan was well cared for and supported in her final years.

A funeral service will be held at First Baptist Church, Halifax on Saturday, April 24th at 1:00 pm. Cremation has taken place. Due to COVID-19 restrictions and limited numbers, this service will be by invitation only. The service will be live-streamed for those wishing to participate from home – First Baptist Church Livestream. Interment will follow ceremony at Camphill Cemetery. Words of comfort for the family can be forwarded to: Cruikshank’s Halifax Funeral Home. In lieu of flowers, donations can be made to the Heart and Stroke Foundation or Acadia University. Joan was a proud Acadia graduate. She was afforded the opportunity to attend Acadia through scholarships and bursaries. Donations directed to Acadia will be used to offer financial assistance to an undergraduate student pursuing studies during the 2021-2022 academic year through the Joan Fraser Memorial Fund. For anyone wishing to send a cheque, they can note Joan Fraser memorial in the memo and send cheques payable to Acadia University to: Office of Advancement, Acadia University, 15 University Avenue, Wolfville, NS B4P 2R6