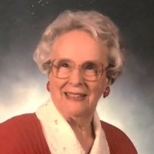 In Memory Of Marion Crowell

The family of Marion Florence Crowell, of Halifax, is saddened to announce her passing on Sunday, October 21, at 96 years of age.

Born in Halifax on January 10, 1922, Marion was the daughter of the late Major Harvey E. Crowell and Mrs. Ella (Purvis) Crowell.

She received her education at Halifax public schools, Halifax Ladies College and graduated with a Bachelor of Arts degree from Acadia University in 1943. Marion developed deep and abiding lifetime friendships during her years at Acadia, residing for four years in Whitman House, affectionately known as “Tully.” After graduation, Marion returned to Halifax and was soon hired in the Office of the Registrar at Dalhousie University, from where she retired in the position of Assistant Registrar after 40 years of dedicated service. Her contributions to that office and to her field of expertise throughout her long career have been recognized at the national level by the Association of Registrars of the Universities and Colleges of Canada, of which she is an Honorary Member.

Marion was a lifetime member of First Baptist Church Halifax, where she served for many years as a Deacon and as a member of the Mission Support Society and of the Auxiliary; she was a former member of the I.O.D.E., and a volunteer and annual Kermess supporter for the IWK Health Centre.

A highlight of Marion’s youth included her travel to France and Britain as part of the Canadian Pilgrimage of 1936. Her father was a decorated First World War hero and commander of C Company, 85th Battalion (Nova Scotia Highlanders), which played a key role in the historic victory of the Canadian Expeditionary Force in the Battle of Vimy Ridge in 1917. Major Crowell, his wife Ella and children Marion and Eddie were among the many Canadian veterans and their families who attended the unveiling of the Canadian National Vimy Memorial in France on July 26, 1936. Marion, then just 14 years of age, had wonderful memories of that trip, including her family’s attendance, at the invitation of King Edward VIII, to a Garden Party at Buckingham Palace on July 29, where she was introduced to several members of the Royal Family.

Marion was a kind and generous woman, with a sparkling yet modest personality. She loved beaches and ocean shorelines. She spent summers with her family at White Point Beach, where she formed a close and lasting bond with her nephew, Harvey, during his childhood. It was time that she remembered with great affection. Marion also enjoyed her annual winter trips to Hawaii, and seasonal visits to her cottage in Lorneville, Cumberland County.

Besides her parents, Marion was predeceased by her brother, Edwin Harvey (Eddie) Crowell in 2017, sister-in-law Jean Titus Crowell in 2005, and beloved nephew, Harvey Edwin Crowell, in 2016.

The Crowell family would like to express deep gratitude and thanks to the staff of The Berkeley (Gladstone), especially to Marion’s personal care attendants for their compassionate and loving care over the past several years.