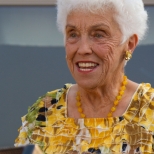 In Memory Of Marjorie Lindsay

Marjorie Adeline Lindsay passed away at the age of 94 on May 1, 2020 at her apartment in Parkland at the Gardens in Halifax.

Born in 1925 into a loving family in Halifax, she was the eldest child and only daughter of Clifford B. and Rita A. Langin. She was part of the first graduating class at Queen Elizabeth High School in 1943, then attended the Maritime School of Social Work and worked for the Children’s Aid Society upon graduation.

In 1946 she met a handsome young engineering student, John Lindsay, and decided he was the one. As she said, a trap does not chase the mouse — but it catches it. They married in 1948 and had their son John Jr. in 1950. John graduated from Nova Scotia Tech in 1951 and his first jobs took them to new places – Lac St. Jean, New Jersey, and in 1953 to St. John’s, N.L. Marjorie gave birth to daughter Deborah in 1954. Although Marjorie had not wanted to leave Halifax at all, she ended up loving the larger-than-life community she found in Newfoundland and cried when the family moved away. John’s work next took the family to Warwick, R.I., in 1957, where she charmed a street full of coffee drinkers to become tea-lovers.

In 1959, the family returned home when John started his own construction company in Halifax. In 1961, they built a cottage in Seabright on French Village Harbour, the same waters Marjorie had summered by as a youth. Seabright was beloved by her for the rest of her life.

Happy to be home, she reunited with childhood friends and added new ones, forging a friendship circle that remained unbroken to the end. Her “Friday Lunch Girls” became famous over decades within the Halifax restaurant scene. She loved to travel: shopping trips to New England, heading down south, going across Canada and around the world. Marjorie formed ever more friendships with fellow travellers she met abroad, as well as those she met through John’s business interests and board memberships.

Marjorie aided in many charitable efforts, but possibly her proudest achievement as a volunteer was establishing the original Northwood seniors home in Halifax. She was a founding board member – the only woman on that board – and in the beginning she reviewed every application sent in by those seeking a home there. The stories of those original residents stuck with her. She continued to support seniors through her many years as a board member for Victoria Hall, and volunteered for decades with the Junior League, First Baptist Church and other organizations.

With the loss of her John in May 2006 and the grief and sadness that followed, Marjorie saw the opportunity to contribute further to the community that had provided so much for her family. Her first gift was the foundational support for a new YMCA in Halifax, an organization her husband had been devoted to for decades. This gift was followed by support to an enormous breadth of projects: a new engineering school at Dal, a new mental health floor at the IWK, a summer camp for children with illnesses, the new Central Library, the Black Loyalist Centre, the women’s studies centre at MSVU, new gardens and facilities at Northwood, girls’ programming in Southern Africa and island conservation in St. Margaret’s Bay. This is an incomplete list of the many causes she supported. What was key for many of these projects was that she gave early, often first, when it mattered the most.

Four years ago, she moved from her home of 40-plus years on Pryor Street to Parkland at the Gardens. She joined many friends who had been urging her to come, then befriended everyone she did not already know. The staff at Parkland and Care-at-Home have supported her fully over these past four years and she enjoyed every day of it. Her family thanks them all.

Marjorie had many gifts – for happiness, for lightness of spirit – but the greatest was her presence. It was her natural way to shine her light on one person and make that person feel like they shared a special relationship with her. It would be inaccurate to say that Marjorie loved people – she loved each person, individually. Marjorie lived to talk over a cup of tea, sitting close enough to squeeze the hand of the friend she was with. She was also an instinctive public speaker who dazzled crowds at events with her easy charm and emotional intimacy. She was a loving wife, devoted mother, caring aunt, generous friend, and the platonic ideal of a grandmother, and it would stretch the limits of this paper to list every person who will miss her deeply. She will not be soon forgotten.

We cannot gather how Marjorie would want in these peculiar times, so a celebration of life must wait. But in anticipation of such a celebration, we have created a website – www.celebratemarjorie.ca . If you knew Marjorie, please go there to share your email address so we can let you know when such a gathering will occur and to post pictures, stories, memories, and condolences.

She was predeceased by her husband, John; her brothers, Bob (Geneva) Langin and Hughie Langin; her sisters-in-law, Isabelle Langin and Mary Hand; and brother-in-law, Harold Lindsay.