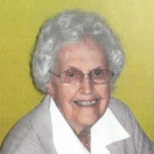 In Memory Of Yvonne Ward

WARD, YVONNE CLAIRE of Halifax, passed away on September 22, 2018 in the QEII hospital, Halifax. She was born in 1920 in Nottingham, England, daughter of the late Thomas and Clare (Smith) Walker.
The family emigrated to Canada in 1928, settling in the Annapolis Valley. Yvonne studied nursing at the Royal Victoria Hospital in Montreal during WWII. She subsequently worked as a registered nurse in different capacities and locations in Nova Scotia.

Yvonne was married to a Baptist Minister, husband Rev. Earl Ward, and served in pastorates in Massachusetts, Paradise, NS, and First Baptist church, Dartmouth. They also lived and worked in Sydney and Yarmouth, before retiring to New Minas, Nova Scotia, where they remained active for many years, enjoying travel in Canada, the United States and abroad.