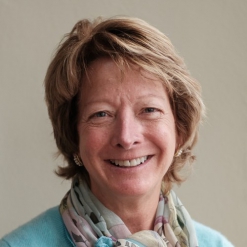 
Arla Johnson earned her Master of Divinity degree from the Atlantic School of Theology in May 2021. She began attending FBCH with her wife, Julie, when they relocated to Halifax in 2012. In fact, she and Julie were married at FBCH in 2017.

Having served as a Deacon at FBCH, the congregation called her to the new role of Minister of Inclusive Community in September 2021. Much of her work has focused on the start of Queer Spirit Church. Arla also assists in worship leadership and occasionally preaches. She has a special interest in pastoral care related to death and dying.

Arla is currently a candidate for Ordination at FBCH and with the Canadian Association for Baptist Freedoms (CABF).

Arla says, “My service here at FBCH, with God as my Guide, Christ as my example for living, and the Holy Spirit as my constant companion, connects me to both the Sacredness of humanity and the Sacredness of Creation.”